Opinion
Alternative for the US in Syria: Forming a NATO axis 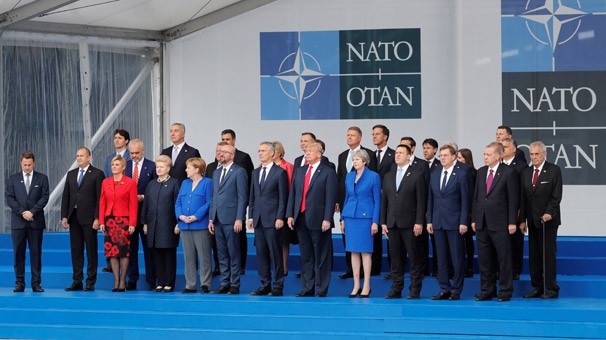 Alternative for the US in Syria: Forming a NATO axis

After the latest chemical attack by the Assad regime in eastern Ghouta, Trump made an official statement regarding punishing the Assad regime for its crime. Governments of France and the United Kingdom rapidly declared their readiness for a joint military strike. Changing dynamics around the Syrian crisis opens the question of the possibility to form a new axis of NATO states in Syria. While USA, France and UK have ongoing military operations in Syria under the umbrella of the International Coalition, Turkey as a NATO state conducted its own military operations in Syria. Turkey on one side, USA, France and UK on another side and Iranian-Russian axis are the 3 main axis in Syria. While Turkey currently works with Russia and Iran within the Astana process, a new axis of NATO states of USA, France, UK and Turkey would change balance of power.

With ISIS almost destroyed and HTS weakened, an axis of NATO states have the possibility to strengthen the Syrian opposition without a major danger of empowering radical elements, to push Assad out of power, to limit Iran, to impose democratic values in a new constitution for Syria and (to) promote democratic change in Syria. However, in order to form such an axis of NATO states, NATO states have to convince Turkey as a main player in Syria by abandoning the YPG. However obstacles are massive and a political intention to create such an axis does not exist yet.

US strikes against the regime

Recent chemical attack by the Assad regime in Douma not only reminded the world how crucial and illegitimate the Assad regime is, but also how weak his position could become. An important issue is territorial control in Syria. The Assad regime may have regained strategicly important Aleppo and Ghouta with Iranian and Russian support, but a big portion of land remains a No-Go area for the regime until USA, France, UK and Turkey maintain their military presence.

Despite the US, French and British army presence in Syrian territory, Russia, Turkey and Iran are working on a political solution for Syria within the Astana process without them. The exclusion of US, France and UK is not only a political decision but also a result of lacking leverage. US, France and UK have outmanoeuvred themselves from the real political issue in Syria between the regime and the opposition by ending their support for the Syrian opposition and the Free Syrian Army, partnering with the YPG and solely focusing on defeating ISIS.

To become a strong part on the political settlement in Syria, the USA, France and UK has to reengage with their NATO ally Turkey and the Syrian opposition. Real issue which divides these NATO countries and Turkey are their support for YPG militants. Especially after the near defeat of ISIS in Syria and current political dynamics, countries who supported the YPG have a big margin to renew their attitude in Syria. Argument to use the YPG in order to limit Iran isn’t sustainable as the YPG has a strong relation with Iran.

Turkey and US are natural allies

For Turkey, its natural alliance is with its NATO allies, but the US insistence to work with the Syrian branch of the PKK hinders this axis to become reality. Turkey continues to be the main anti-Assad forces in Syria with its leverage over Syrian rebels. From Turkish perspective, the US administration is cooperating with a terrorist organization which threatens its national security and killed over 35 thousand Turkish citizens.

To create an axis of NATO states, the USA, UK and France need to abandon the YPG in Syria, exchange the PKK leadership within the Syrian Democratic Forces with local leaders, allow Turkish Army to get into US-held areas of Syria to observe PKK/YPG activities and integrate the Syrian Democratic Forces under the command of the Syrian Interim Government. The Syrian Interim Government which is acknowledged by the US and many states as legitimated Syrian opposition is also the first political body of the Syrian Opposition who has control over an armed actor – the National Army.

Besieged rebels in the Rastan pocket who formed the 4th Corps as an attempt to get political protection. The 1st, 2nd and 3rd Corps of the National Army are operating in northern Aleppo and Afrin. It’s also expected that the National Army may expand into Idlib region. By forming an axis of NATO states, Turkey, USA, France and UK can together build up a real army under the command of the legitimated Syrian Opposition.

By doing so, axis of NATO states would control a territory from Afrin in northwest Syria to Ebu Kemal in east Syria, Al-Tanf region in southern Syria and several observation points in Idlib. The NATO axis would also be able to expand its territorial control to Idlib in northwest Syria. Under current circumstances, the axis of NATO states would have control over 44 military bases, observation points and airfields.

Arguments in terms of efficiency of an axis of NATO states in Syria may be strong, but the political environment and the persistence of USA to work with the YPG and the Turkish perspective seeing the YPG as a national security threat hinders any axis of NATO states. For Turkey, until its NATO allies abandons the YPG, its more meaningful to work with Russia and Iran. For the USA, UK and France, their partnership with the YPG looks more like stubbornness than a real long-term policy decision for Syria. As long as NATO states don’t cooperate in Syria, its likely that Iran, Russia and the Assad regime will use this opportunity in their own favour.