Who is Who?
The Kurdish National Council in Syria 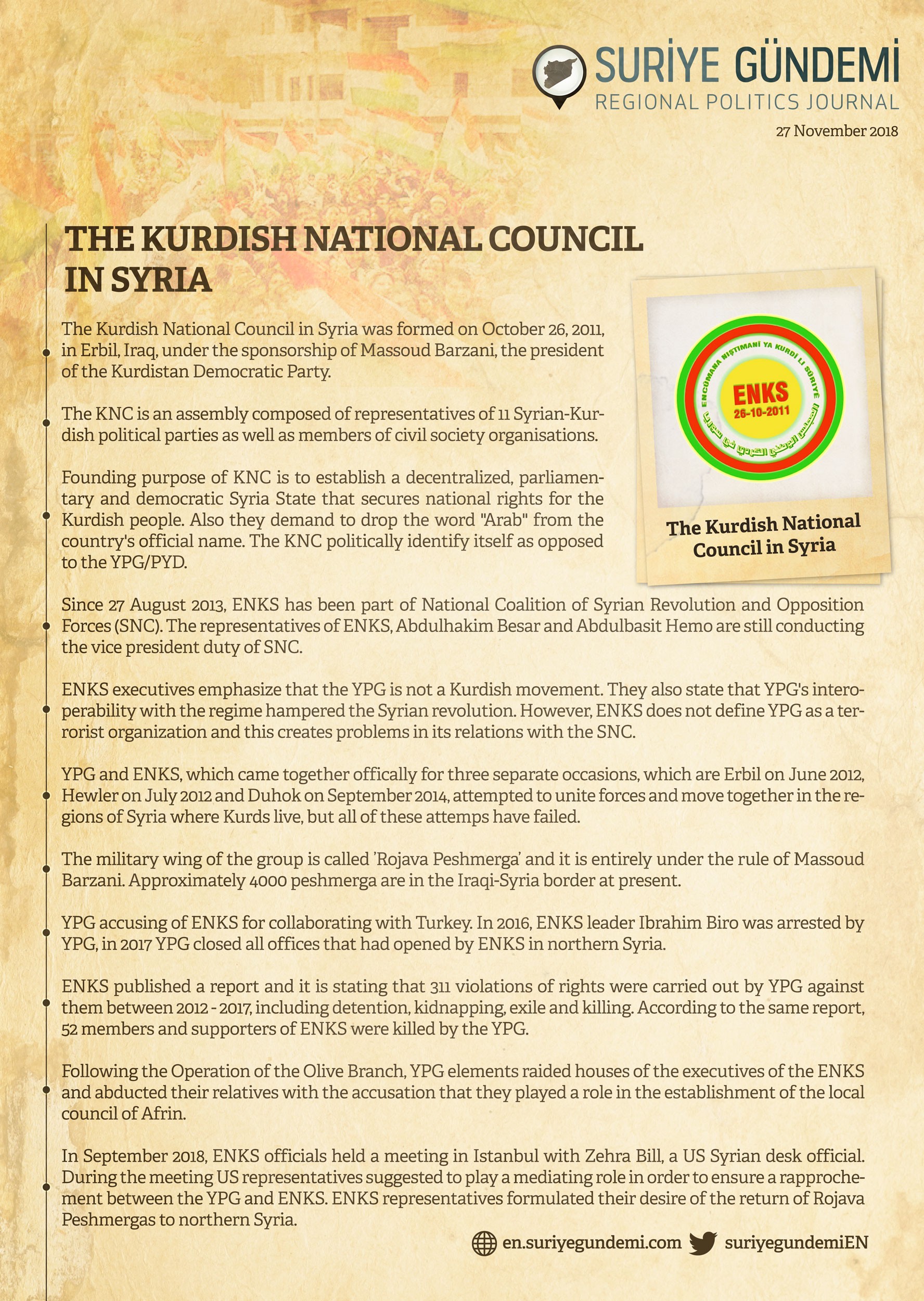 The Kurdish National Council in Syria

The Kurdish National Council in Syria was formed on October 26, 2011, in Erbil, Iraq, under the sponsorship of Massoud Barzani, the president of the Kurdistan Democratic Party. [1]

The KNC is an assembly composed of representatives of 11 Syrian-Kurdish political parties as well as members of civil society organisations.[2]

Founding purpose of KNC is to establish a decentralized, parliamentary and democratic Syria State that secures national rights for the Kurdish people.[3]Also they demand to drop the word “Arab” from the country’s official name. The KNC politically identify itself as opposed to the YPG/PYD.[4]

Since 27 August 2013, ENKS has been part of National Coalition of Syrian Revolution and Opposition Forces (SNC). The representatives of ENKS, Abdulhakim Besar and Abdulbasit Hemo are still conducting the vice president duty of SNC.[5]

ENKS executives emphasize that the YPG is not a Kurdish movement. They also state that YPG’s interoperability with the regime hampered the Syrian revolution.[6]However, ENKS does not define YPG as a terrorist organization and this creates problems in its relations with the SNC.[7]

YPG and ENKS, which came together offically for three separate occasions, which are Erbil on June 2012, Hewler on July 2012 and Duhok on September 2014, attempted to unite forces and move together in the regions of Syria where Kurds live, but all of these attemps have failed.[8]

The military wing of the group is called ’Rojava Peshmerga’ and it is entirely under the rule of Massoud Barzani. Approximately 4000 peshmerga are in the Iraqi-Syria border at present.[9]

YPG accusing of ENKS for collaborating with Turkey. In 2016, ENKS leader Ibrahim Biro was arrested by YPG, in 2017 YPG closed all offices that had opened by ENKS in northern Syria.

ENKS published a report and it is stating that 311 violations of rights were carried out by YPG against them between 2012 – 2017, including detention, kidnapping, exile and killing. According to the same report, 52 members and supporters of ENKS were killed by the YPG.[10]

Following the Operation of the Olive Branch, YPG elements raided houses of the executives of the ENKS and abducted their relatives with the accusation that they played a role in the establishment of the local council of Afrin.[11]

In September 2018, ENKS officials held a meeting in Istanbul with Zehra Bill, a US Syrian desk official. During the meeting US representatives suggested to play a mediating role in order to ensure a rapprochement between the YPG and ENKS. ENKS representatives formulated their desire of the return of Rojava Peshmergas to northern Syria.[12]