Opinion
Between Rock and a Hard Place: The Armed Syrian Opposition In Idlib 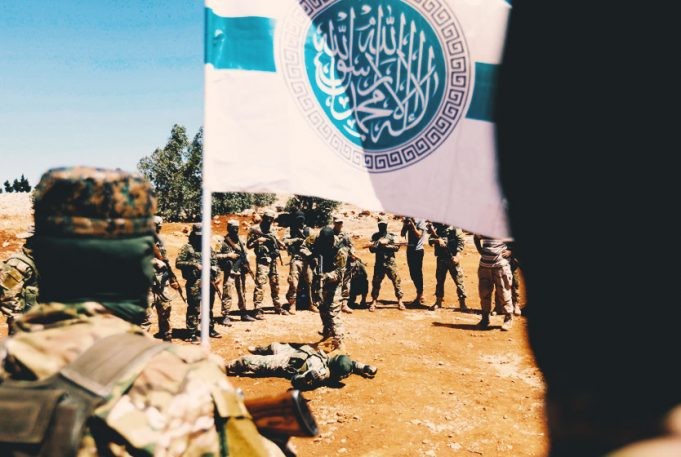 Between Rock and a Hard Place: The Armed Syrian Opposition In Idlib

The outside danger of a regime assault has forced the armed Syrian opposition to cooperate with extremists, after they faced a huge setback following an Al-Qaeda-Hayat Tahrir al-Sham (HTS) linked major assault. While the Syrian opposition could have pushed back extremists, their inability to act as a united front made them an easy bite for extremists. As HTS expanded its control in Idlib, opposition fighters and groups in the area are now facing a dilemma. One the one hand, the Syrian opposition does not want to cooperate with extremists, but on the other, they want to protect their hometowns from the Assad regime, manning the front lines and providing HTS with the needed manpower, which the later cannot gather on its own. Long rivals of HTS, such as Ahrar al-Sham and Suqour al-Sham had to sign a deal with extremists, allowing its fighters to man the front lines in areas recently lost to HTS. Pinched between the danger of losing their hometowns to the Assad regime and their instability to act united against HTS, the armed Syrian opposition are preparing their own graveyards.

On January 1, 2019, HTS started its assault on areas held by the Nureddin Zengi Movement under the pretext of the killing of five of its elements by the later. As it became clear the next day that HTS aims to eradicate the entire presence of the Nureddin Zengi Movement, the general leadership of the National Front for liberation declared a general mobilization against extremists. The National Front for Liberation is a Turkish-backed umbrella of the armed opposition factions, which was gathered under one banner in order to counterbalance radical groups in Idlib. The National Front for Liberation included 11 Turkish-backed Free Syrian Army factions, including Faylaq al-Sham, Jaysh al-Nasr, the Free Idlib Army, the First and Second Coastal Divisions, the First and Twenty-Third Divisions, the Second Army, Jaysh al-Nukhba, Shuhada al-Islam Darayya, and Al-Hurriyat Brigade. Later, they have been joined by the Nureddin Zengi Movement, Ahrar al-Sham, Jaysh al-Ahrar, and Suqour al-Sham.

Despite the call by the National Front for Liberation, factions in Idlib have shown little readiness to confront HTS and aid the Nureddin Zengi Movement. HTS was able to capture all areas held by the Nureddin Zengi Movement and force their leadership to flee to Afrin, as Ahrar al-Sham and Suqour al-Sham accompanied by small subunits of Jaysh al-Nasr, the Free Idlib Army and Jaysh al-Nukhba in the Ghab Plains put up some fights against extremists. During the second round of its operations, HTS attacked the Ghab Plains and captured the entire area. On January 10, a ceasefire signed between sides ended the clashes in Idlib. The ceasefire also formalized HTS superiority within Idlib.

However, HTS faced a huge burden, which it couldn’t solve alone. As areas held by the Nureddin Zengi Movement and the Ghab Plains were located along the front lines with the Assad regime-held areas, these front lines had to be manned. First, HTS tried to persuade opposition fighters with salaries and promises to supply them, but these attempts failed. Knowing that its own manpower wasn’t enough, HTS needed the Syrian opposition to man the front lines in Idlib. Additionally, HTS had seen itself under pressure as opposition fighters living in the Ghab Plains wanted to leave the area towards Afrin. In the broader context, HTS strengthened its own position, but were on the verge to weaken the general balance of power in Idlib against the Assad regime.

Therefore, the extremists signed another deal with Ahrar al-Sham and Suqour al-Sham, which allows for the return of these to the front lines in the Ghab Plains. The deal was signed by the two factions in order to protect their hometowns from the Assad regime. It does not put the factions under the control of HTS, but it does imply that the factions have to coordinate their work with HTS within an operation room. Also, many former subunits of the Nureddin Zengi Movement joined Faylaq al-Sham, meaning that the front lines in western Aleppo will be strengthened by opposition fighters.

If the Syrian opposition in Idlib cannot get out of this pinch, it is doomed to fail. A growing presence of HTS will make a Russian-supported regime assault on Idlib more likely as Turkey will have a weaker position to prevent such an operation. The 12 Turkish observation points in Idlib are the main obstacles for the regime to start a wide-scale operation towards Idlib. Therefore, the negotiations between Turkey and Russia on the Syrian issue will decide over the fate of Idlib and the armed Syrian opposition.

However, HTS is now discussing providing the armed Syrian opposition with a new perspective in which the HTS-initiated civil ‘Salvation Government’ will form a Defense Ministry to which a new military council will belong, uniting all the armed groups inside Idlib. According to critics by Al-Qaeda figures who defected from the former Al-Nusra Front, the military council will be led by a commander of Faylaq al-Sham, who is a defected Syrian military officer. Additionally, rumors suggest that a former minister of the pre-2011 Syrian government will head the Salvation Government in order to boost the legitimization of the HTS-initiated body. The aim of HTS is to unite the entire armed factions in Idlib under its own government, and aims to prevent the legitimization of a military assault by Russia due to its own hegemony in Idlib and to strengthen its own military manpower.

Within HTS, this idea is a new attempt of the pragmatist wing. In the past, the pragmatist wing succeeded in accelerating the cut of ties to Al-Qaeda and the formation of HTS. With these developments, many hardliners of the former Al-Nusra Front deserted and others were assassinated by unknown gunmen in Idlib. Despite the strengthening of the pragmatist wing inside HTS, the dogmatic wing has still power to put an end to it, as the later controls the most efficient military units of HTS. The balance of power within HTS is thus shaping the future of Idlib.

While this idea is relatively new and is still being discussed inside HTS, it might be seen as a way out of the dilemma for the armed Syrian opposition in Idlib. However, this would mean that the armed opposition would be used in an attempt as a tool to legitimize the HTS project. It also seems unlikely that HTS would hand over its power. Instead, it might seek to use the military council under the Salvation Government as a front group. Furthermore, it has to be seen how this idea will evolve. Currently, neither HTS seem to be ready for such a move, nor is the international community ready to accept such a structure in Idlib.

From the Turkish perspective, the situation in Idlib is directly related to its own national security, as Turkey is already the country hosting the largest refugee population and wants to avoid a new refugee crisis. On the other hand, Russia wants to keep its good relations with Turkey and is aware of the difficulties and risks of a military operation towards Idlib. Therefore, both sides may agree on a roadmap, which will at least delay a military operation towards Idlib. In the long run, a solution has to be found on the issue of HTS in Idlib, which will be a military one. In this regard, the armed Syrian opposition has the opportunity to protect their hometowns from extremism and the Assad regime.

Under current circumstances, the Syrian opposition remains weak in their disunity and seem incapable of getting rid of HTS. In this case, the Assad regime would start an operation towards Idlib under the pretext of the presence of HTS supported by Russia, who will try to persuade Turkey to withdraw from Idlib. The Syrian opposition however seems reluctant to protecting their hometowns and are instead retreating, which could force them to cooperate with extremists in case of a regime assault. Such a scenario would surely end in the armed defeat of the Syrian opposition in their last stronghold.