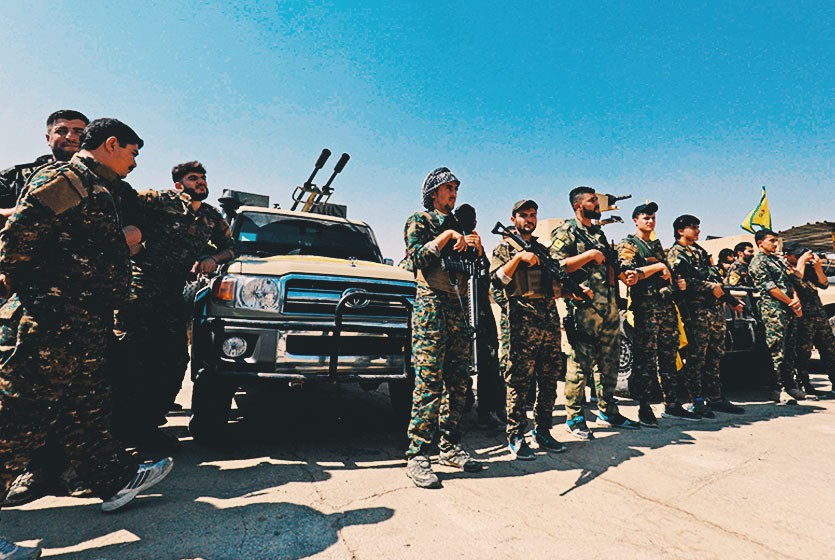 There are certain methods to analyze the threat posed to states by insurgent and terrorist organizations. One may work for the best of this paper is the method that categorizes the ideological strings, capacity and the logistics of the terrorist and insurgent groups to see the rationale behind their threat posed against the states. Modern states base their survival on two instinctual defense mechanisms, namely territorial integrity and sovereignty. This paper is going to reveal how and why YPG/PKK terrorist organization is an active menace for the Turkish territorial integrity and sovereignty.

The “Great Design” of YPG/PKK

As mentioned in Ocalan’s book of “Road to Kurdish Revolution- A Manifesto” which he established PKK’s ideology, there is a certain bargain that the terror organization wants to strike. The way to obtain this bargain is certainly an organized method of utilizing coercion towards the Kurdish people to organize and force them against the states, which are antagonized. The states antagonized in Ocalan’s ideology are Turkey, Iran, Iraq and Syria, which uphold the “Kurdish Heritage” according to him and other PKK ideologists. Every ideology as in the case for PKK also, requires a utopia or a “great design” where the bargains and ends are achieved through the methods suggested by the leaders of the movement. In Ocalan and YPG/PKK’s case, this is the case of a “National Democratic Kurdish State” which will base its institutionalization on socialist and Marxist values. In addition, every great design requires a territorial “design” (imagination) and in Ocalan and PKK’s ideology it is the great Kurdish territory, which categorically includes lands from, the four countries mentioned above. The practical design of this ideological program is to establish a “Democratic Confederation” which will include one confederation from each country.  This is one of the most important reasons behind the threat perceived by the Turkish state from YPG/PKK in Syria and Iraq. Although there are political boundaries, each of these four states grasp the idea behind the YPG/PKK and the other branches’ moves towards the “great design” which means the loss of territorial integrity for these nation-states. It is quite obvious that nation-states are designed to protect their borders no matter what the cost is in the long term.

This makes it very feasible to understand why Turkey feels threatened by the mere existence of YPG/ PKK in both Syria and Iraq. The mere ideology itself is a threat to Turkey’s territorial integrity thus even YPG/PKK demilitarize themselves it would be rational for Turkey to absorb and insulate the ideology as much as possible.

States do not perceive threat per se without any actual organization that holds a certain amount of capacity to use force. The number of militants in the PKK terrorist organization is asserted to be more than 6000. The one third of this population is believed to be in the Turkish soil preparing and managing the attacks and logistical matters. When it comes to YPG the numbers are much higher. It has been asserted many times that YPG has more than 30.000 militants across the Syrian border. The total number of manpower in the hands of YPG/PKK should be more than 50.000 when the YPG/PKK activities in Deir ez-Zor and the other east southern parts are taken into consideration, as well.

Additionally, there has been many incidents where the weapon systems such anti-tank, man portable systems and explosive substances that are given to YPG/PKK and then transferred to Turkey through tunnels built mostly in Mardin and Diyarbakır provinces. Strong evidence towards this phenomenon was discovered during the clashes between Turkish Armed Forces and PKK militants in Nusaybin/Mardin. In this border district it was revealed that PKK had been transmitting goods and military equipment through tunnels that opens to Syria. This development transformed into a rationale for TAF to determine the annihilation of YPG/PKK militants in a holistic sense.

It is not only the militants that doubts the states when it comes to popular movements but its the people who support these fight conducted by the guerillas. The number of Kurdish-origin citizens in the demographic mosaic in Turkey is believed to be around 13 million. This causes an assertive reaction from the Turkish state against any movement that has the mobilization of Kurdish people as a mean to reach a higher goal. So the Kurdish-origin citizens of Turkey become an integral part of this equation. The ideology promoted by the leaders of the organization usually tries to mobilize the people in terms of creating a more massive movement. As Ocalan designates the reformists, as “recreant” Kurds who betray the Kurdish cause and choose to stay within the incumbent state’s boundaries. As for all ideologies that oppose a given status-quo YPG/PKK’s ideology also endavours a great change in the circumstances which constrain the Kurdish folk into a dichotomy. According to PKK’s ideology Kurds all around the world and especially the people in those four states are bound to choose between supporting “the cause” and betraying the cause. This is of course a technique widely used in propaganda making which is called framing. Therefore both in the manpower and the influential manners YPG/PKK has a potential that turns them into de facto strategic threats.

The Principle of Proximity in Security

The designation of a threat as “strategic” requires a certain type of circumstances and some type of reasoning. Let us assume there are 5000 YPG/PKK militants in the border areas of Iraq and Syria and 50000 YPG/PKK militants in New Zealand. The rational state behaviour would dictate that the most imminent threats should be taken into consideration more than the other ones even though those bear a higher potential. This is called the principle of proximity in state security and it has a certain type of rational thinking that is accurate usually.

Since the YPG/PKK militant clusters are usually near the Turkish-Syrian border the threat posed YPG/PKK is perceived as a more strategic threat than the other threats such as economic breakdown, the Syrian crisis as a whole etc. There has been rumours that YPG/PKK was prepared to invade Turkish territory in the exact night that the failed coup d’état attempt took place in 15th July. Even the rumour itself proves that in the minds of the Turkish decision-makers YPG/PKK poses a constant threat for the territorial integrity of the Turkish state. It is quite rational for Turkish decision-makers to perceive YPG as a strategic threat per se and with each canton established the threat becomes more imminent. This was the basic rationalé behind the Olive Branch Operation as Turkey successfully impeded the plans to construct a border cluster of YPG/PKK militants which would pose a liquid threat that would use its potential in a matter of moments in case of any kind of turmoil in the country.

All being said, Turkey’s rationale behind the threat perceived by YPG/PKK is based on realistic assumptions in both the theoretical and practical sense. Since the ideology of YPG/PKK has a “great design” that insults the integrity of Turkish territory. Secondly, the organizational structure of it holds a potential to damage the state in an array of ways with the manpower they have and the popular support behind them. In the last phase, these two organizations pose a threat to the states they designate as “colonizers” since they are either in those states’ territory or next to their border. As any antagonistic organization with an ideology that targets means of one state’s possession, physical potential to damage or take away what is currently being controlled by the state and that is proximate, YPG/PKK have always been and will always be a strategic threat as long as they exist.