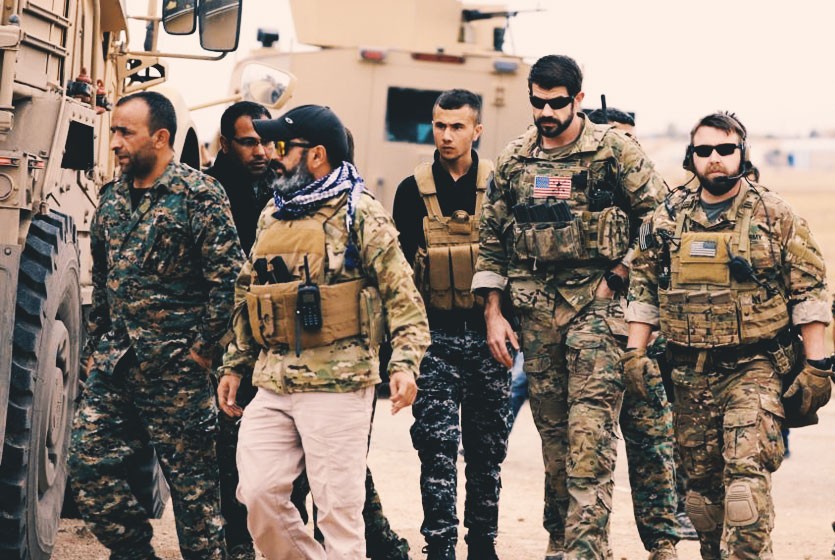 Syrian Opposition Reacts To US Withdrawal

On Dec. 19, U.S. officials stated that the Pentagon had an order to move troops out of Syria as quickly as possible. Later on, they started to inform their partners in northeastern Syria about their plans regarding the immediate pullback of American forces from the region, where they have been trying to wrap up the campaign against Daesh. This surprising decision by the Donald Trump administration not only has the potential to change the dynamics of Syria, but also has the capacity to change the position of the Syrian opposition. In this regard, the Syrian opposition took the U.S.’ decision to withdraw with a grain of salt at first. However, the follow-up tweets of Trump and the events following the declaration caused euphoria among the Syrian opposition as they hope to seize control of all the People’s Protection Units-held (YPG) territories in Syria.

The decision by the Trump administration makes the opposition believe in a new process in Syria where they will strengthen their position as Yusuf Hamoud, the spokesman of the Turkey-trained National Army, claimed: “We, as the National Army, alongside the Turkish army, consider us the biggest gainers of this decision, and we will move the battle east of the Euphrates soon to liberate the region from terrorist gangs such as [the Democratic Union Party] PYD.”

Hamoud also stated that: “We read Trump’s decision as political diplomacy, and Turkish politicians are able to achieve understanding of American aims on the Syrian issue. So we consider this decision as a partial withdrawal from the northern part of the Syrian-Turkish border area toward the Syrian depth region.”

Also the former spokesman of the National Army, Abu Riyad Hamadin, formulated his skepticism by questioning the U.S. withdrawal; whether they will withdraw entirely from Syria or only from the region located in the Syrian-Turkish border. To this end, they will be able to prevent direct confrontation with Turkey by opening up a way for Turkey and the National Army to launch a military operation against the YPG.

Later on Dec. 24, Hamadin expressed that all of the territories currently held by the YPG will be controlled by the National Army together with the Turkish Armed Forces (TSK) without the interference of any other, so the U.S. presence in Syria will be handed over to the TSK.

Explaining the reasons behind the U.S. decision to withdraw, the spokesman alleged that the establishment of the National Army in clear coordination with the Turkish political and military leadership, will strengthen the position of Turkey on the political level.

Also Muhammed Bassoun, a commander of Liwa al-Shamal, a faction belonging to the National Army, talked about his expectations that the most of Syria’s north will come under the Turkish umbrella until the formulation of final political solution in Syria in which Iran will “pack their belongings and leave Syria.”

In this regard, according to Hamoud, the Syrian opposition has always demanded that foreign forces should leave Syria.

As the declaration of the U.S. withdrawal was first skeptically received by the Syrian opposition, Wael Alwan, the spokesman of Faylaq al-Rahman, a faction which was located in eastern Ghouta previously but had to be evacuated to northern Syria after the Russian-backed regime military assault, said on the day of the declaration: “American promises cannot be trusted as the withdrawal declaration is likely to be similar to [Russian President Vladimir] Putin’s previous withdrawal declaration of the Russian troops from Syria, which was made for media consumption and was not implemented on the ground.” On the other side, Alwan furthered that: “Through the statements of Trump and the political battle within the U.S. administration, it is expected that the American declaration is serious and will be implemented, unlike the other examples, such as Putin’s announcement.”

At the beginning, Othman Millo, the chief of the Istanbul office of the Kurdish National Council, said the U.S. withdrawal decision was made to pressure the Syrian Democratic Forces (SDF) to accept other actors’ participation in the administration, to ease Turkey’s security concerns and to dismantle the administrative system of the YPG.

In this regard, the YPG rejected the deployment of Syrian peshmerga in the border region with Turkey. But later on, Millo’s view evolved as he said he fears Russia and Iran will fill the void of a U.S. withdrawal, but he also pointed out that the U.S. presence inside Syria had negative aspects as well, like negatively affecting Turkey, who bravely stands with the Syrian people. Millo criticized that the U.S.’ presence in Syria had no clear and supportive vision for the Syrian people and the Syrian revolution.

Alwan’s words sum up the reaction of the Syrian opposition: “Indeed, the decision announced by the American president is very important and surprising to all, because it is contrary to previous U.S. statements as they stated that the U.S. forces will stay in northeastern Syria.”

Dima Moussa, the vice president of the Syrian National Council, focused on the political impact of the U.S. withdrawal and said: “Generally, anything that would contribute to ensuring minimal U.S.-Turkey tension will likely have positive effects on Turkey’s position in support of the opposition and in the Astana process, which would also have a positive effect on advancing the Syrian political process.”

All of this, of course, depends on the details of the withdrawal and the level of coordination with the Syrian opposition represented by the Syrian National Coalition and of course coordination with the Turkish side. I personally see this move as a tactical move as opposed to strategic; I think that the U.S. may pull out military personnel so that they will not have boots on the ground. However, it is unlikely that they will completely leave the area. We have seen this scenario several times in different areas of the multiple regions.