Analysis
Is the Abdi Family the new Makhloufs of Syria? 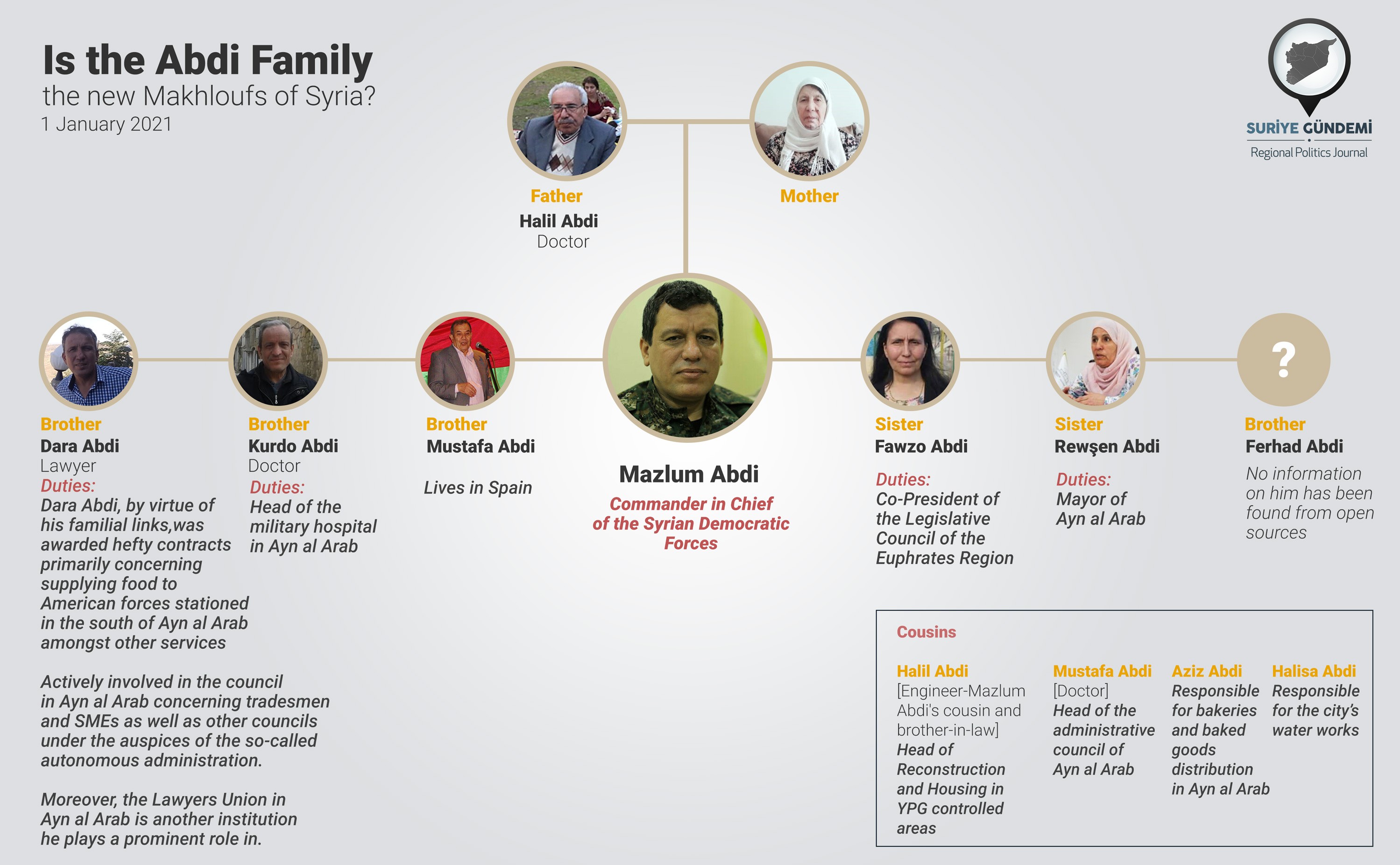 As per reports by researcher Hedwig Kujipers, which have been validated by Suriye Gündemi through various resources both open and local sources, many members from the Mazloum Abdi’is family have acquired significant positions within the so-called autonomous administration of the YPG/SDF.

Moreover, a PKK sympathizer on Twitter has openly declared that Mazloum Abdi’s family members are part of the administration in the city of Ayn al Arab. The Twitter account with the name “Ali Fırat” associates himself with the PKK and in his social media posts refers to the PKK as “our movement” going as far as referring to the founding leader of the terrorist organization, Abdullah Öcalan, as “leader”. It is significant that these allegations, also confirmed by sources on the ground by Suriye Gündemi, have been validated by someone from the PKK-network.

Suriye Gündemi, which validated many of the claims directed against the Abdi Family, has uncovered information regarding Abdi’s siblings. In Ayn al Arab (Kobane), foremost, Mustafa, Kurdu, Mazlum, Dara, Fawzo and Rewşen Abdi, all siblings of Abdi, are increasing their footprint in the SDF administration. Moreover, according to a Syrian Kurdish source from the area, Abdi has another brother called Ferhad who lives in Ukraine. However, no information on him has been found from open sources. While it is not possible to make a definite statement, there is a possibility that he might be Mazloum Abdi who is also known as Ferhad Abdi Şahin and Şahin Cilo.

Mazloum Abdi’s sister, Dara Abdi’s Facebook account reveals photos of most of the family’s members. Further, in a photo from Nowruz celebrations, which includes a significant portion of the family (mother, father, sister, brother and uncle), Dara Abdi hasn’t neglected to tag Fawzo Abdi, his sister.

Kurdu Abdi shares a photo of himself and Dara Abdi on Facebook.

Again, on Kurdu Abdi’s Facebook profile one may find a photo of his brother Mustafa Abdi.

Although we cannot provide details due to security concerns, a the local source is in close contact with the Abdi family as he went to the same school class with one of the Abdi family. This source has stated that while only Mazloum Abdi joined the PKK, members of his family were also PKK sympathizers. Indeed, Facebook posts from these family members are also quite intriguing. In this regard, it is significant that Mustafa Abdi, known to be the family’s eldest brother, shared a eulogy on Facebook for Enver Alloush, who recently died in Spain while serving a prison sentence for drug trafficking. This highlights the family’s close ties to the PKK’s founding cadres, and more significantly to the cadres in Syria. Indeed, Envar Alloush is a man who hosted Abdullah Öcalan in his home in Syria and is a close friend of Salih Muslim. He is also a name who was prominent in the PKK’s drug network in Europe.

According to Kujipers’s report[6], based on open sources and staff of the so-called autonomous administration, Abdi’s brother, Dara Abdi, by virtue of his familial links, was awarded hefty contracts primarily concerning supplying food to American forces stationed in the south of Ayn al Arab amongst other services. Dara Abdi, who happens to be a lawyer, is also actively involved in the council in Ayn al Arab concerning tradesmen and SMEs as well as other councils under the auspices of the so-called autonomous administration. Moreover, the Lawyers Union in Ayn al Arab is another institution he plays a prominent role in. These councils serve as extensions of the so-called autonomous administration in Ayn al Arab. Another allegation to point is that Mazloum Abdi’s other brother Kurdu Abdi’s position as head of the military hospital in Ayn al Arab. It is known that Kurdu Abdi is an orthopedist. In the Abdi Family, where the eldest brother Mustafa Abdi and father Halil Abdi are also doctors, it is also quite popular to study medicine amongst nephews and nieces. Medicine comes to the forefront in terms of the professions of the male members of the family.

In addition, it is stated in the report that Fawzo Abdi, sister to Mazloum, in her role as either co-president or member of the so-called autonomous administration’s Kobane People’s Parliament, visited Turkey in 2014 as a pro YPG political agent.[7] At the moment Fawzo Abdi serves as the co-president of the Legislative Council of the Euphrates Region. Basically, Fawzo Abdi is directly part of the legislative process of the YPG.

At the moment, allegations on Abdi’s sisters are not merely about Fawzo Abdi. According to Kujipers’s validation through an open source, Rewşen Abdi, another sister of Mazloum, holds the position of mayor of Ayn al Arab.

The Abdi Family’s presence in the region’s YPG supported institutions is not limited to the immediate family. According to Kujipers, cousins of the Abdi Family have also landed many positions in the region. Abdi’s cousin and brother in law, engineer Halil Abdi, functions as the head of Reconstruction and Housing in YPG controlled areas.