Opinion
Syria’s Unending Inter-Rebel Conflict: The War Within The Opposition 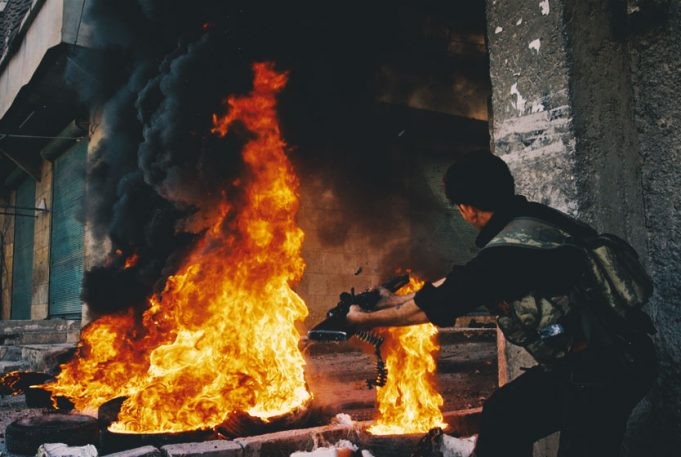 Syria’s Unending Inter-Rebel Conflict: The War Within The Opposition

Since the early months of the Syrian War, the main problems of the Syrian opposition were failure to create one unified political body to represent all sides opposing the Assad regime, and the inability of different armed groups fighting on the ground to create a unified military alliance. Seven years later, matters for the opposition got worse and the lack of unity within opposition caused it some serious strategic losses during the war as well as international credibility. So, what is the Syrian inter-rebel conflict, how was Assad regime able to radicalize different Syrian opposition armed groups and how did it all affect the course of war?

July 2011 was marked with the foundation of the FSA, which presented itself as an “armed group, with the aim to bring down the Assad regime and to establish a democratic state”[1]. FSA was the main opposition group in the first year of the civil war[2]However, at the same time; other groups started emerging on the surface. The influential groups such as Jaysh al-Islam, Ahrar al-Sham and al-Qaeda affiliated al-Nusra Front also emerged around July-August 2011. One of main difference between FSA, Islamist groups and al-Qaeda were their vision of a post-Assad Syria. While FSA claimed to be fighting for a “secular and democratic Syria, where rights of all Syrians would be respected”[3], the Islamist groups’ objectives varied from creating the “Islamic democracy”[4]to an “Islamic emirate under Sharia law”[5]. In the beginning of the war, all groups cooperated with each other under the same goal of overthrowing the Assad regime. However, the leaderships of all groups understood perfectly well that such cooperation is only temporary, but 2 major factors allowed disagreements between various groups to escalate in to a full-fledged conflict.

Firstly, the controversial decision of the Assad regime to release political prisoners. In May 2011, the Assad regime ordered a mass release of political prisoners, but majority of people, who got amnesty, were islamists or radicals, many of whom had military experience and connections with Islamist groups. People like Zahran Alloush (ex-leader of Jaysh al-Islam), Hassan Abboud (ex-leader of Ahrar al-Sham), Ahmad Issa al-Sheikh (leader of Suqour al-Sham), Awaad al-Maklaf and Abu Atheer al-Absi (senior personnel of ISIS) were all released from Syrian prisons, while many Syrian oppositions activists, who didn’t have any ties with islamists or extremist groups remained in jail.[6]So, the decision of the Assad regime to release these wasn’t a mistake, it was a well calculated political move. The regime knew that those will join an uprising against him and he was right. From the end of 2012, Islamist groups started to take over Syrian uprising and overshadow the FSA, which leads to gradual radicalization of Syrian opposition armed groups .

Secondly, the issue of leadership and hierarchy within Syrian opposition armed groups also became a flashpoint. One of the main reason of the FSA’s decline and the start of dominance of islamist groups was an issue of leadership within FSA. Till the late 2012, FSA tried to operate as a central command, but as the conflict progressed, it became more like a network of various armed organizations in different parts of Syria[7], each of whom had their own leader, hierarchy, name, but accepted the identity of FSA. The gradual decline of centralization within FSA’s structure weakened the organization’s positions in Syria and later made it vulnerable to ISIS expansion in summer of 2013 and assault by some other islamist groups. The Russian military campaign which was launched in October of 2015 and YPG’s expansion in north of Aleppo in the beginning of 2016 further weakened FSA and allowed islamist groups’ influence to grow within Syrian opposition.

The problem of leadership and cooperation was also an issue within Syrian islamist groups as well. From 2013 to 2015, the biggest rebel alliance was the “Islamic Front”, which composed of main islamist groups like Ahrar al-Sham, Jaysh al-Islam, Suqour al-Sham, Kurdish Islamic Front, Liwa al-Haqq and others. The influential Tawhid Brigade was also part of the alliance.[8]Islamic Front fought against government forces, different pro-government militias and ISIS while counterbalancing the al-Qaeda affiliated-Nusra Front. However, the alliance didn’t last long. By the end of 2014, it became clear that the alliance failed to unify Syria’s strongest opposition forces. The initial goal of gradual unification of different groups wasn’t achieved. Moreover, the group’s integrity was challenged by ongoing rivalry between Jaysh al-Islam and Ahrar al-Sham. Eventually, Ahrar al-Sham started absorbing other smaller groups of the coalition like Suqour al-Sham, Liwa al-Haqq, Kurdish Islamic Front and remnants of Tawhid Brigade. Islamic Front became defunct by March of 2015.

On March of 2015, Ahrar al-Sham formed a joint command center with the Nusra Front, which led to the alliance between the two groups called Jaysh al–Fath.[9] Jaysh al-Fath fought against the Assad regime in north west of the country and in March 2015 defeated Syrian army and Hizbollah in the battle for Idlib and by June of 2015 successfully expelled Syrian army and its allies from all of the Idlib province and parts of Hama. Despite the initial success of Jaysh al-Fath, the relations between Ahrar al-Sham and Nusra Front eventually deteriorated to a point of a full-fledged conflict between these two. In January 2017, Jaysh al-Fath was officially dissolved. In other words, the opposition armed groups who fought together to keep government forces out of Idlib, started fighting among themselves. That’s how complicated relations were between different Syrian rebel groups, who all essentially had one aim, which was to overthrow the Assad regime.

The nature of Syrian inter-rebel conflict started changing after Turkey’s increasing involvement in Syrian War. Turkey, which saw both ISIS and Syrian Democratic Forces, an alliance which largely consists of the YPG, as a security threats to itself, decided to militarily intervene in August of 2016. By conducting operations “Euphrates Shield” and “Olive Branch” Turkey strengthened FSA’s positions in the north of Aleppo.

There are three major rebel alliances right now in Syria. The first one is the FSA, which managed to survive despite ISIS, YPG expansion, the Russian military campaign and internal conflict. FSA became more organized since Turkey’s direct involvement.  Moreover, FSA factions in northern Aleppo and Afrin formed the National Army with Turkey’s backing[10]. In Idlib two main formations are operating. The first is the National Front for Liberation. Second one is an extremist Hayat Tahrir al-Sham (HTS) .[11]Hayat Tahrir al-Sham was formed by merger of former Al-Nusra Front and some other jihadi groups. HTS has recently strengthened its positions in Idlib after emerging victorious from the battle with parts of the National Front for Liberation.

What’s next for Syrian opposition? Syrian inter-rebel conflict doesn’t seem to end soon, due to serious ideological, political and strategic differences between groups involved in it. The recent rise of HTS in Idlib clearly indicated how complicated and unsolved matters for Syrian opposition armed groups are. It’s too early to talk about any kind of united opposition military front, so the goal which was set up from the first months of the conflict, won’t be achieved anytime soon.  However, it seems that Turkey’s influence over opposition will grow, as well as National Army’s role among Syrian opposition groups. Moreover, it’s possible to say that recent victories of HTS, push more groups to align with Turkey and their participation in possible upcoming Turkish operation in northern Syria.