Who is Who?
The Prime Minister of the Syrian Interim Government: Abdurrahman Mustafa 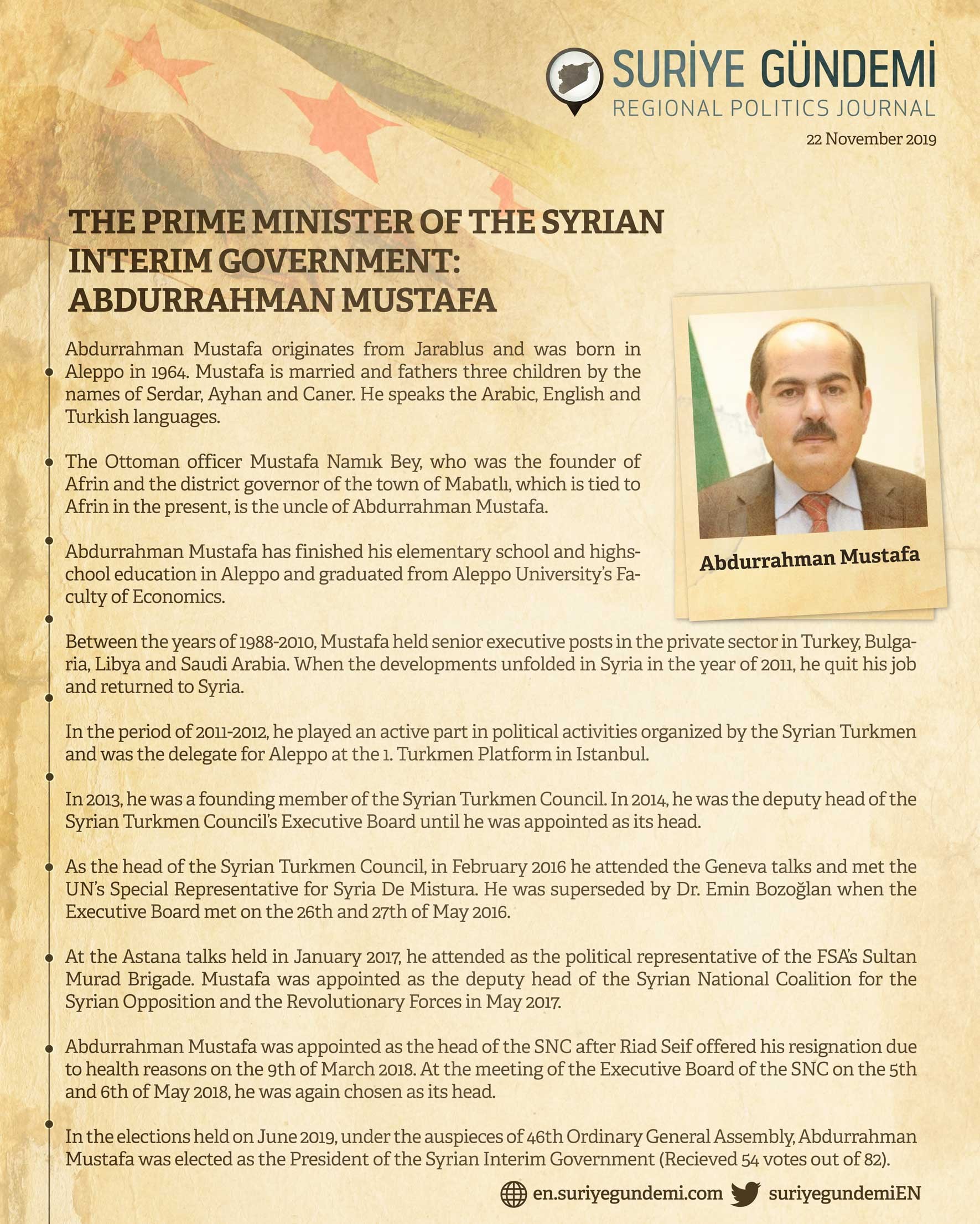 The Prime Minister of the Syrian Interim Government: Abdurrahman Mustafa

Abdurrahman Mustafa originates from Jarablus and was born in Aleppo in 1964. Mustafa is married and fathers three children by the names of Serdar, Ayhan and Caner. He speaks the Arabic, English and Turkish languages.

The Ottoman officer Mustafa Namık Bey, who was the founder of Afrin and the district governor of the town of Mabatlı, which is tied to Afrin in the present, is the uncle of Abdurrahman Mustafa.

Abdurrahman Mustafa has finished his elementary school and highschool education in Aleppo and graduated from Aleppo University’s Faculty of Economics.

Between the years of 1988-2010, Mustafa held senior executive posts in the private sector in Turkey, Bulgaria, Libya and Saudi Arabia. When the developments unfolded in Syria in the year of 2011, he quit his job and returned to Syria.

In the period of 2011-2012, he played an active part in political activities organized by the Syrian Turkmen and was the delegate for Aleppo at the 1. Turkmen Platform in Istanbul.

As the head of the Syrian Turkmen Council, in February 2016 he attended the Geneva talks and met the UN’s Special Representative for Syria De Mistura. He was superseded by Dr. Emin Bozoğlan when the Executive Board met on the 26th and 27th of May 2016.

At the Astana talks held in January 2017, he attended as the political representative of the FSA’s Sultan Murad Brigade. Mustafa was appointed as the deputy head of the Syrian National Coalition for the Syrian Opposition and the Revolutionary Forces in May 2017.

Abdurrahman Mustafa was appointed as the head of the SNC after Riad Seif offered his resignation due to health reasons on the 9th of March 2018. At the meeting of the Executive Board of the SNC on the 5th and 6th of May 2018, he was again chosen as its head.

In the elections held on June 2019, under the auspieces of 46th Ordinary General Assembly, Abdurrahman Mustafa was elected as the President of the Syrian Interim Government (Recieved 54 votes out of 82).