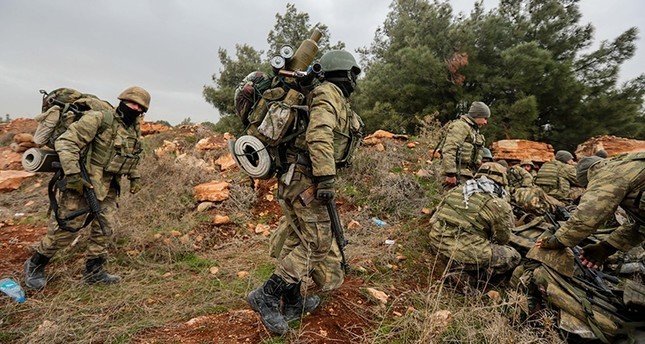 When the launch of Operation Olive Branch was announced on January 20th, many experts and analysts had serious doubts about the fate of the operation that aimed to capture Afrin from the PKK’s Syrian affiliate, the Yekîneyên Parastina Gel (YPG). Military gains against Daesh with direct American support led to the YPG’s image transforming into the most effective fighting force in Syria. Also, post-coup attempt dismissals in the Turkish Armed Forces (TAF) raised questions regarding its effectiveness, which came to be doubted by some analysts. But within two months, the TAF and its local ally, the FSA seized Afrin from the YPG with minimal military losses . This sudden TAF-FSA victory in Afrin refuted many a myth regarding Turkey and the YPG. Thus, it is important to identify these misconceptions as myths proven wrong on the battlefield.

The first myth that the Afrin operation debunked is the claim that the YPG is the most effective fighting force on the Syrian battlefield. Since the siege of Ayn al-Arab (Kobane) the YPG has been fighting against Daesh in Ayn al-Arab, Tal Abyad, Manbij, Raqqa and Deir Ezzor with US air support , US supplied weapons and funding. The US’ direct support has been decisive in these  YPG victories over Daesh on many fronts. In addition to the military achievements that took place against Daesh, the discourse that presents the YPG as a “secular and anti-jihadist” fighting force was/is a popular talking point of the Western media. Not only did the media and analysts turn a blind eye to YPG-PKK links, but they also ignored the fact that it was US support for the YPG that was the real defining factor. The heavy losses incurred by the YPG against Daesh in Northern Syria prior to American intervention were forgotten. It was this illusion that led some to expect heavy YPG resistance in Afrin, and even a TAF defeat. However, the group had a number of shortcomings when confronting the Turkish army. These disadvantages from which the YPG suffered as compared to the fronts against which it fought against Daesh were ignored. Turkey’s geographical advantages such as its long land borders with Afrin and the TAF’s presence in the Euphrates Shield area were also disregarded.

Likewise, another false hope was that Russia would be a permanent obstacle between Turkey and Syrian airspace. Excepting a short period, the TAF entered Syrian airspace and launched air strikes with considerable comfort and efficiency. The Turkish air force was a new serious threat for the YPG, and the YPG’s resistance capacity against a modern air force had not been tested apart from  the occasional isolated air raids by the Syrian regime. Turkey, which boasts a  much stronger air capacity when compared to the Syrian Air Force, was able to make considerable inroads with its F-16 fighter jets and its armed UAVs. The YPG had the advantage of terrain and various defensive measures it had taken against a potential incursion, such as tunnels and trenches, which connected its main lines of defense in Rajo, Jinderes and Bursaya . However, TAF experience against the PKK in the mountainous terrain of Southeastern Turkey and Northern Iraq became an asset in overcoming this situation. The FSA’s activity and success in Afrin also shows its capability to reshape itself into a formidable fighting force with the support of Turkish training and funding .

Another mainstay of flawed analyses was the myth that the TAF had lost much of its military capability as a result of post-coup attempt dismissals. However, the TAF disproved this claim as well, with its success in cross border operations such as operations Euphrates Shield (ES) and Olive Branch. In ES, the local allies of the TAF (FSA units mostly active in Northern Aleppo) were fragmented and unprepared. TAF air raids were also very limited when compared to Operation Olive Branch. However, ES forces turned out to be very successful in their test against Daesh, which had put up a much fiercer resistance than the YPG. In capturing of Jarabulus, al-Rai and al-Bab the TAF demonstrated that even after the previous mass dismissals, it could launch cross border operations very effectively. On the first day of Operation Olive Branch, intensive air raids were conducted by 72 fighter jets as a show of force, while the thousands of well trained and equipped FSA troops were proof of the TAF’s capability to build a local fighting force. Sources suggest roughly 7000 Turkish troops – including Special Forces and Amphibious Marine Brigade units- took part and supported FSA troops in operation Olive Branch. It is significant to note that, with a total manpower of approximately 500000 (Land forces, Air Force, Navy, and the Gendarmerie), just 1.4% of the TAF was mobilized for Operation Olive Branch .

The final  myth that Turkey disproved was about Turkey’s diplomatic capabilities. Could Turkey launch cross border operation into Syria without the “permission” of the US or Russia? It’s obvious that Turkey engaged in an intense diplomatic endeavor with both countries over the fate of Syria, especially the YPG-administered northern region. However, the myth in question positions Turkey as a completely passive actor ineffective against Russia and the US. However, it’s a fact that Turkey has serious influence over Syrian rebels in Idlib and rural Aleppo and this influence strengthens Ankara’s position in negotiations with Washington and Moscow. While aiming to limit the American zone of influence, Moscow cooperates with Turkey in Idlib to reduce its war costs and balance Iranian influence. Russia has such leverages with regards to Turkey as the blocking of Syrian air space and the backing of an offensive towards Idlib. However, Ankara can also be a direct threat to Russian interests by supporting rebel activity in Idlib, Aleppo, and even Latakia. Regarding this balance of power, Turkey has by no means been a passive actor and has gained a strong position for post-war negotiations in Syria by way of its growing influence. Despite the absence of an agreement on the fate of Manbij, ongoing talks also represent signs of a resurgent Turkish diplomacy.

Turkey’s policy of indirect involvement on the Syrian battlefield through rebel groups transformed into direct intervention through operations Euphrates Shield and Olive Branch. Ankara’s direct influence on Syrian territory has now broadened to include al-Eis (South West Aleppo), Afrin, Azaz, Tal Rifaat, al-Bab and Jarabulus. Thus, all scenarios regarding Northern Syria –especially Idlib and Aleppo- should include Turkey as a partner in order to minimize the risk of political failure.  If Washington continues to pursue its current pro-YPG policy in Northern Syria, it may face serious consequences such as a possible conflict with Turkey around Manbij, Tel Abyad, Kobane and Rasulayn and such scenario will definitely have a negative impact on US-Turkey relations.