Who is Who?
Formation of the Oldest Shiite Militia in Iraq: Badr Organization 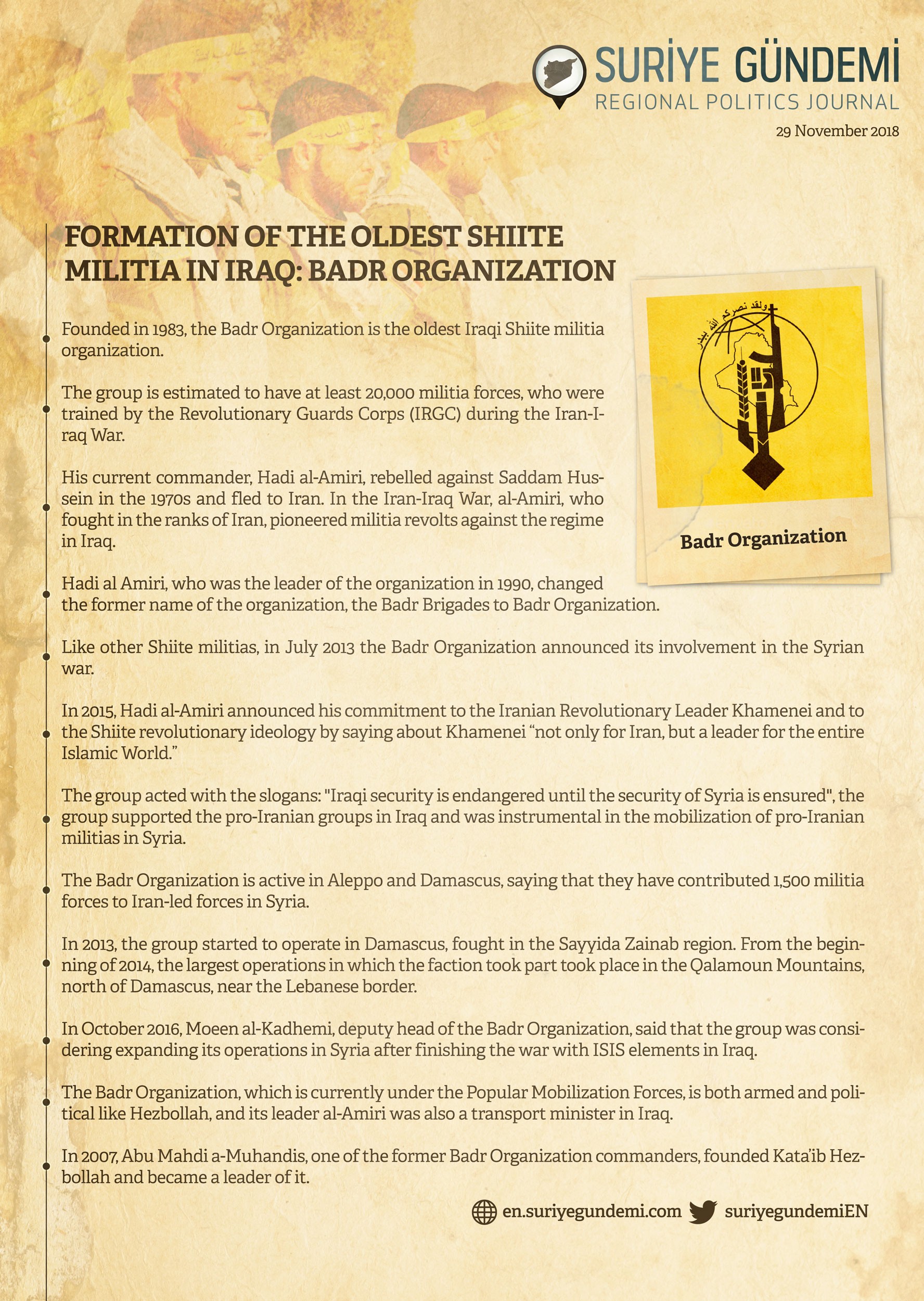 Formation of the Oldest Shiite Militia in Iraq: Badr Organization

Founded in 1983, the Badr Organization is the oldest Iraqi Shiite militia organization.

The group is estimated to have at least 20,000 militia forces, who were trained by the Revolutionary Guards Corps (IRGC) during the Iran-Iraq War.

His current commander, Hadi al-Amiri, rebelled against Saddam Hussein in the 1970s and fled to Iran. In the Iran-Iraq War, al-Amiri, who fought in the ranks of Iran, pioneered militia revolts against the regime in Iraq.[i]

Like other Shiite militias, in July 2013 the Badr Organization announced its involvement in the Syrian war.[ii]

In 2015, Hadi al-Amiri announced his commitment to the Iranian Revolutionary Leader Khamenei and to the Shiite revolutionary ideology by saying about Khamenei “not only for Iran, but a leader for the entire Islamic World.” [iii]

The group acted with the slogans: “Iraqi security is endangered until the security of Syria is ensured”, the group supported the pro-Iranian groups in Iraq and was instrumental in the mobilization of pro-Iranian militias in Syria.[iv]

The Badr Organization is active in Aleppo and Damascus, saying that they have contributed 1,500 militia forces to Iran-led forces in Syria.[v]

In 2013, the group started to operate in Damascus, fought in the Sayyida Zainab region. From the beginning of 2014, the largest operations in which the faction took part took place in the Qalamoun Mountains, north of Damascus, near the Lebanese border.[vi]

In October 2016, Moeen al-Kadhemi, deputy head of the Badr Organization, said that the group was considering expanding its operations in Syria after finishing the war with ISIS elements in Iraq.[vii]

The Badr Organization, which is currently under the Popular Mobilization Forces, is both armed and political like Hezbollah, and its leader al-Amiri was also a transport minister in Iraq.

In 2007, Abu Mahdi a-Muhandis, one of the former Badr Organization commanders, founded Kata’ib Hezbollah and became a leader of it.