Who is Who?
Movement of Iranian Ahl Al Sunnah Muhajirs 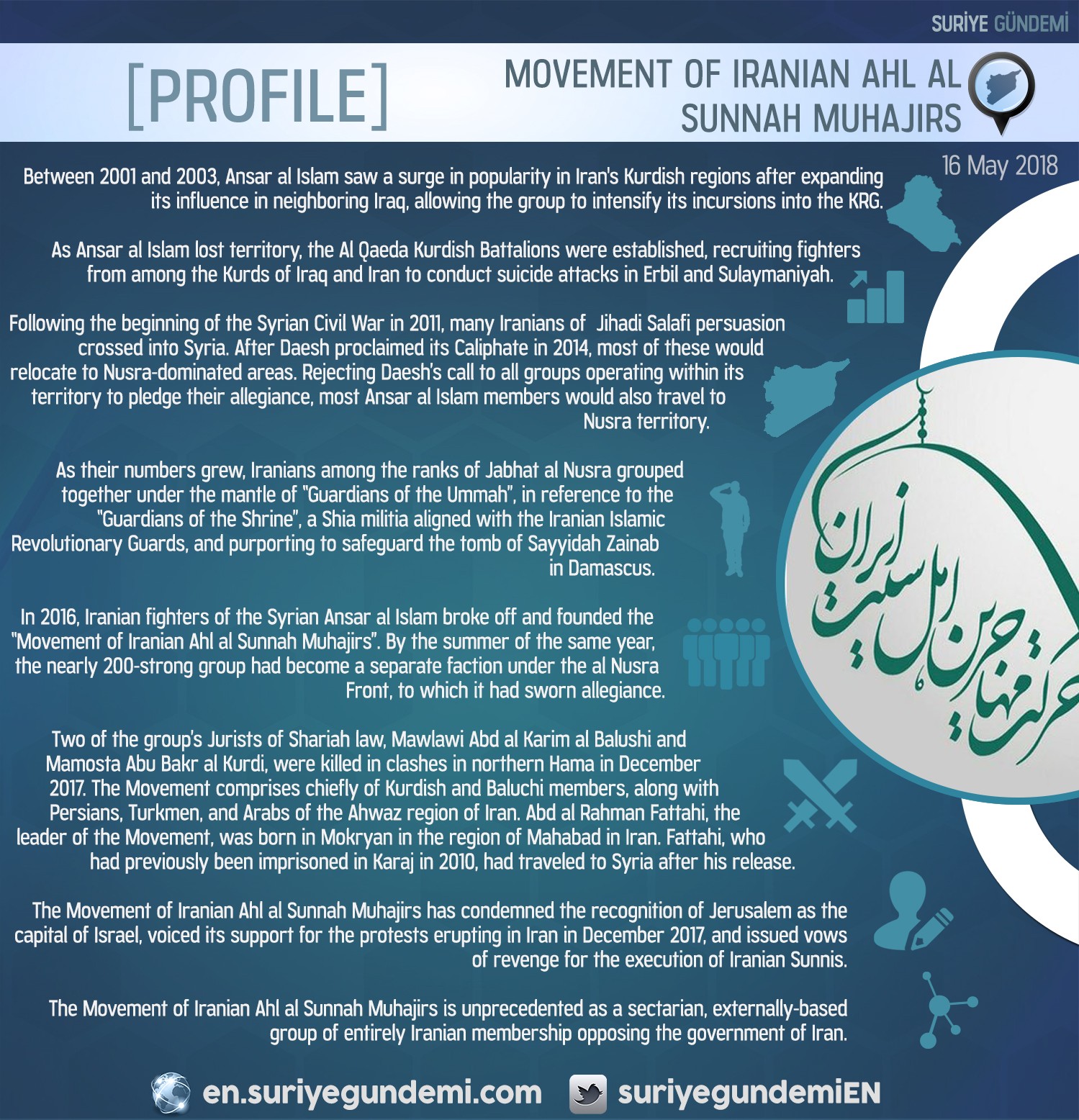 While Salafism is not particularly widespread in Iran’s Sunni regions, the country has seen increased activity of organizations such as Al Qaeda and Ansar al Islam from the late 1990s to the mid-2000s, especially in the Kurdish northwest. Between 2001 and 2003, Ansar al Islam saw a surge in popularity in Iran’s Kurdish regions after expanding its influence in neighboring Iraq, allowing the group to intensify its incursions into the Kurdish Regional Government. As Ansar al Islam lost territory, the Al Qaeda Kurdish Battalions were established, recruiting fighters from among the Kurds of Iraq and Iran to conduct suicide attacks in Erbil and Sulaymaniyah. Reports have since emerged of large numbers of Iranian nationals traveling to Taliban and Al Qaeda training camps in Afghanistan and Pakistan after 2008.

After 2011, it is known that many Iranians of Jihadi Salafi persuasion crossed into Syria. Rejecting Daesh’s call to all groups operating within its territory to submit to the group, most Iranian fighters opted to travel to Nusra dominated areas after 2014. As their numbers grew, Iranians among the ranks of Jabhat al Nusra grouped together under the mantle of “Guardians of the Ummah”, in reference to the IRGC-aligned “Guardians of the Shrine”, a Shia militia purporting to safeguard the tomb of Sayyidah Zainab in Damascus.1

In 2016, Iranian fighters of the Syrian Ansar al Islam broke off and founded the “Movement of Iranian Ahl al Sunnah Muhajirs”. By the summer of the same year, the nearly 200-strong grouphad become a separate faction under the Nusra-dominated Hayat Tahrir al Sham (HTS). During the 2017 offensive initiated by the HTS in northern Hama, aka Operation “Tell them to Work/WaKolE’emalo” (Quran 9:105), the Muhajirs incurred their heaviest lossesas yet,including two of the group’s Jurists of Shariah law, Mawlawi Abd al Karim al Balushi and Mamosta Abu Bakr al Kurdi, in December 2017.2 The Muhajirs comprise of chiefly Kurdish and Baluchi members, along with Persians, Turkmen, and Arabs of the Ahwaz region of Iran. The group has lately enhanced its social media activities, placing the slogan “Presenting the Institution of al-Qādisiyyah” on its posts.3 Abd al Rahman Fattahi, the leader of the Movement, was born in Mokryan in the region of Mahabad in Iran. Fattahi, who had previously been imprisoned in Karaj in 2010, traveled to Syria after his release. 4

The Movement of Iranian Ahl al Sunnah Muhajirs has also issued statements on matters outside of the Syrian Civil War. Such examples include the condemnation of the recognition of Jerusalem as the capital of Israel, support for the protests erupting in Iran in December 2017, and vows of revenge for the execution of a number Iranian Sunnis.5

Iranian Sunnis also fight under the banners of various Syrian groups such as Ahrar al Sham and Faylaq al Sham, however the Muhajirs set themselves apart from these as they are comprised exclusively of Iranians. There also exist other externally-basedIranian opposition groups, including the left-leaning People’s Mujahedin, the Democratic Party of Iranian Kurdistan, and PJAK. The Movement of Iranian Ahl al Sunnah Muhajirs is unprecedented as a sectarian, externally-based group of entirely Iranian membership opposing the government of Iran.