Analysis
Russia, Turkey, and the Fate of Idlib 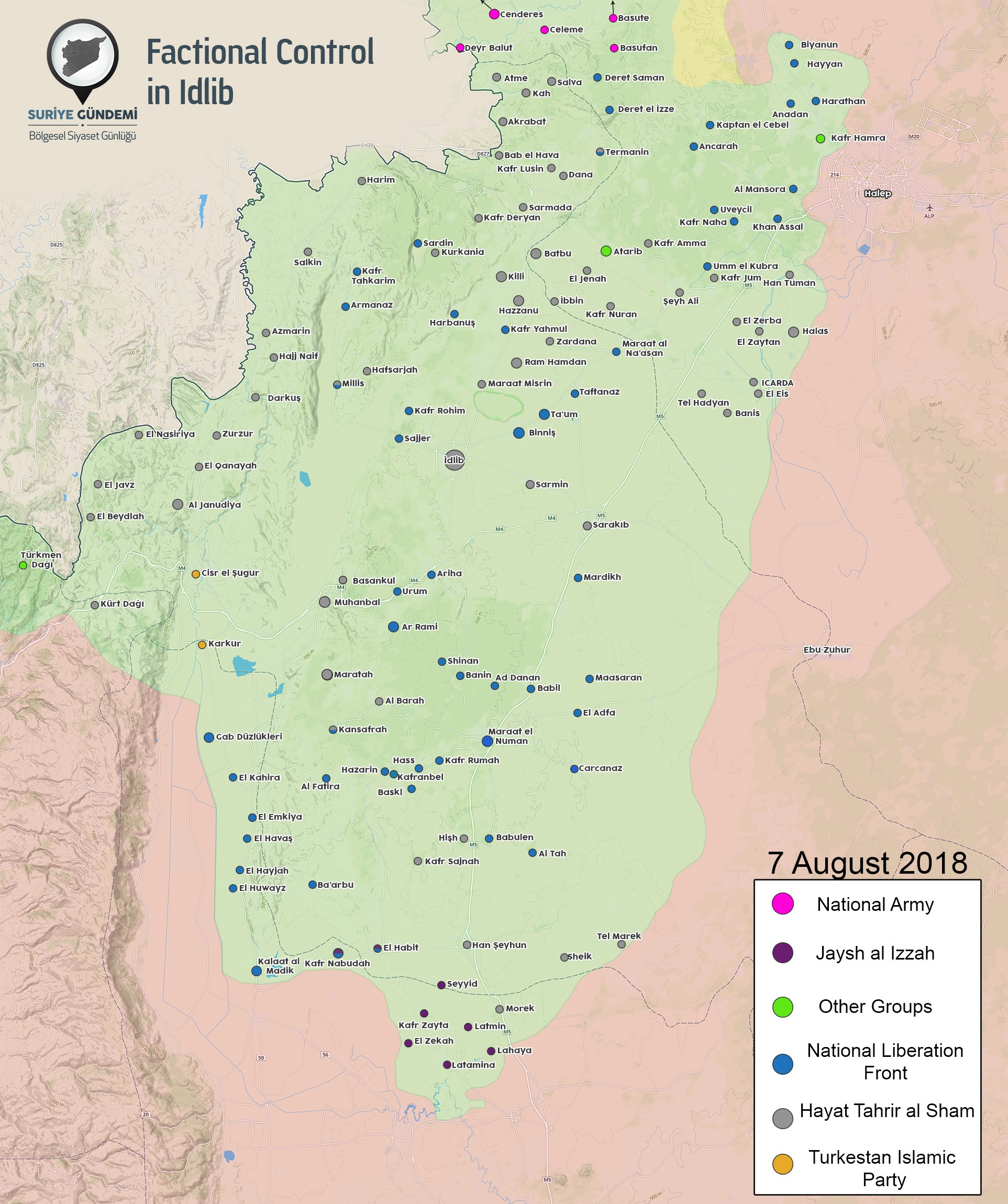 Russia, Turkey, and the Fate of Idlib

In Idlib, Turkey could deter Russian airstrikes and ensure the region remains out of the Syrian regime’s control by going after extremist groups.

While negotiating terms of surrender with Free Syrian Army factions in southwestern Syria in early July, Russian officials warned rebels evacuating the area not to regroup in Idlib, as this city would be the regime’s next target. However, despite Russia’s plans to attack Idlib, the presence of the Turkish army in the area is preventing them from carrying out an assault that could lead to conflict between the tenuous allies. Although Turkey has strong motivation to maintain its sphere of influence in the province, Russia may be able to use the threat of airstrikes to pressure Turkey either to leave or increase its fight against radical groups such as Hayat Tahrir al-Sham (HTS) and Hurras al-Din.

In May 2017, the Astana peace process designated Idlib a de-escalation zone. In accordance with the agreement, Russia, Iran, and Turkey established military observation points along Idlib’s frontlines, 12 overseen by Turkey and another 10 by Russia and 7 by Iran. Turkish authorities warned Russia and the Assad regime that any attack on Idlib would void the entire Astana process. Turkey’s presence also put its army in direct contact with local authorities and factions, who began to see it as the guarantor of peace in Idlib. This improved Turkey’s leverage over and coordination with the armed Syrian opposition.

Yet Turkey will have little choice but to take on the more extreme elements of this opposition if it wants to avoid Russian involvement in Idlib. Russian Presidential Special Envoy for Syria Alexander Lavrentyev declared on July 31 that Russia expects Turkey to coordinate with the moderate Syrian opposition to solve Idlib’s Jabhat al-Nusra problem. Among the main groups fighting the regime in Idlib is HTS, formed from Jabhat al-Nusra after it split from al-Qaeda. Abu Muhammed al-Jawlani, HTS’s leader accepted the establishment of Turkish observation points in Idlib. The group’s al-Qaeda core—who had been in a dispute with Jawlani over the decision to cut ties with the organization—saw their acceptance of the de-escalation zone as illegitimate. This faction split off at end of February to form the Hurras al-Din group, which maintained its ties with al-Qaeda.

Even as it continues to clash with Hurras al-Din, HTS’s main rival is the Islamist group Jabhat Tahrir Suriya (JTS), a coalition between Ahrar al-Sham and Noureddine al-Zengi Battalions whose attacks are often also supported by independent militia Suqour al-Sham. JTS and HTS fought each other from February to May 2018, when both sides agreed to a ceasefire. During the fighting, HTS was pushed back to the Turkish border, losing several strategic locations such Maarat al-Nouman, which lies along the main road between Damascus and Aleppo.

Although Turkish forces have not yet taken action against these groups, on May 28, Turkey gathered the other rebel factions in Idlib under one banner in order to counterbalance these radical groups. The new National Front for Liberation includes eleven Turkish-backed Free Syrian Army factions, including Faylaq al-Sham, Jaysh al-Nasr, the Free Idlib Army, the First and Second Coastal Divisions, the First and Twenty-Third Divisions, the Second Army, Jaysh al-Nukhba, Shuhada al-Islam Darayya, and Al-Hurriyat Brigade. They have been joined by JTS, Jaysh al-Ahrar, and Suqour al-Sham. With those brigades joining the National Front for Liberation, all Idlib rebels that Russia and Turkey consider acceptable have been gathered under one banner. Except for its new members JTS and Suqour al-Sham, the National Front for Liberation has so far not been involved in any local infighting, and many of its factions enjoy good relations with Turkey, even taking part in Turkey’s Operation Olive Branch in Afrin. If Turkey cannot guarantee that they maintain territorial control of Idlib, other factions Turkey supports, notably in northern Aleppo and Afrin, would question the reliability of that support.

These chaotic dynamics give Moscow the opportunity to pressure Ankara. While the Assad regime would prefer to regain control over all of Idlib, Russia may be satisfied if Turkey coordinates with the National Front for Liberation to rid Idlib of HTS and Hurras al-Din. But if Russia doubts Turkey is willing to do so, it will use the threat of air strikes to pressure Turkey to withdraw from Idlib so that the regime can prepare a full ground offensive. Although the limited Turkish military presence at the observation points blocks the regime and allied militias from advancing along frontlines, the regime and Russia have been able to bomb Idlib as they like over the past year. Turkey could expand its limited armed presence to the entire Idlib area, which would deter Russia from launching air strikes on rebel targets for fear of accidentally hitting Turkish forces and launching a diplomatic crisis. Yet this expansion would also increase the number of targets for jihadi attacks and assassinations. Retreating from Idlib altogether could also encourage Russia to use the same tactics in Afrin and northern Aleppo, endangering Turkey’s reliability as a guarantor of the Astana process.

An aerial bombardment in Idlib would also undermine Turkey’s guarantee of safety for the civilian population. In addition to the range of armed opposition groups, the Idlib area hosts one of the largest Internally Displaced People (IDP) populations in Syria. Airstrikes on the province would leave 2.5 million civilians with “no place else to go.” Civilians in Lataminah in northern Hama—a town within near a Turkish observation point within the broader Idlib de-escalation zone that faced increased regime shelling in late May—have already questioned Turkey’s ability to guarantee their safety. Turkish officials in Idlib assured the local populationthat Turkey will stay to guarantee the de-escalation zone. According to reports by Nedaa Syria, Turkey started building a helicopter field and two big hospitals to supply its soldiers at the observation points, and to further fortify its positions, indicating does indeed intend to remain. But if locals do not trust this promise, the population in Idlib may prefer to take their chances by surrendering to the regime to avoid higher casualties. And if the populations of Afrin and northern Aleppo follow their example, Turkey will have lost its ability to enforce peace on the ground—and thereby any leverage in Syria’s peace process.

However, even if it retreats from Idlib under Russian pressure, Turkey could make the campaign to retake the area costly for the regime despite Russian support. Turkey’s direct control of northern Aleppo and Afrin gives it a direct link with which it can supply weapons, ammunition, and manpower to the National Front for Liberation in Idlib. This may encourage Russia to exhaust other options before trying to oust Turkey so it can launch a massive air strike campaign. Moreover, Russia’s cooperation with Turkey on energy projects such as Turkish Stream and Akkuyu Nuclear station—and closer military ties as seen not just in Afrin but with Turkey’s purchase of Russian S-400 Air Defense Missile Systems in December 2017—will make it keen not to damage its relations by launching a major attack on Idlib.

It appears Turkey and Russia can reach an accommodation by focusing on extremist opposition groups. Rumors have emerged from senior Hurras al-Din member al-Ansari al-Barqawi that Turkey has been trying to locate its leadership and bases so it can target and eliminate the al-Qaeda branch. By using its allied rebel factions to fight radical groups, Turkey may be able to convince Russia to leave more moderate opposition groups alone. Whether Turkey can eliminate Hurras al-Din and HTS remains to be seen. Regardless, to maintain its influence and prevent a new refugee crisis, Turkey will work hard to ensure Idlib remains out of the regime’s control.