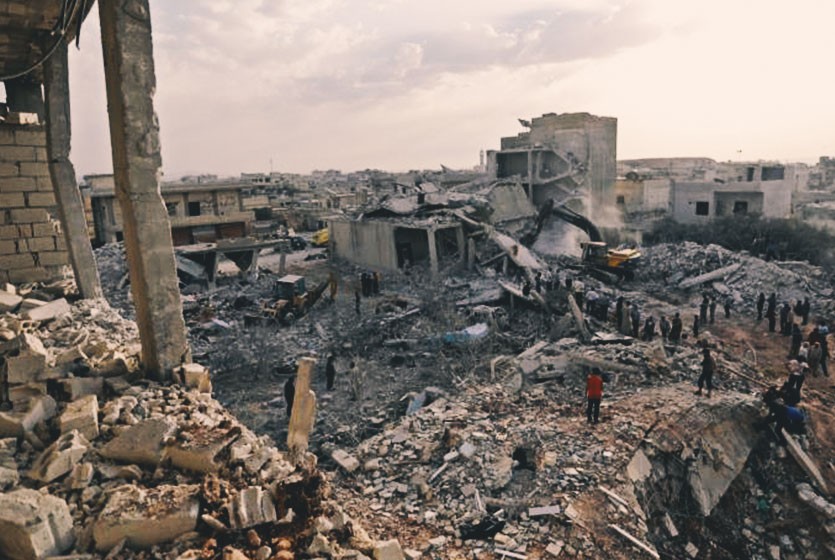 Sharing the costs of rebuilding Syria
In seven years of war, nearly half a million people have lost their lives due to killing by bombardment, torture or chemical weapons.

More than 6.1 million people have been displaced within Syria and another 5.6 million have fled the country as refugees.

The UN’s Economic and Social Commission for Western Asia estimated the costs of Syria’s reconstruction at $388 billion. As neither the Assad regime, nor its backers Russia and Iran, have the needed resources – and China’s support won’t be enough, the reconstruction of Syria should be divided into areas of responsibility between Turkey, the United States and the regime axis.

By doing so, Syrians may find a path to recovery in their country.

The destruction of Syria become exorbitant due to the tactics of the Assad regime – especially the scorched earth strategy used by the Damascus (and its backers Russia and Iran), leading to the destruction of entire cities.

In order to force Syrian rebels and civilians under siege to surrender or accept an evacuation deal, the regime explicitly targeted infrastructure. The bombing of hospitals, markets, administrative buildings, universities and schools by the regime and Russian air forces made living in those areas impossible, and forced the armed opposition to surrender.

Except in the case of Raqqa, the most significant destruction has been caused by the regime and its backers.

Even if the historical comparison lacks from many aspects, the case of Germany and its destruction after the Second World War may be an inspiration for Syria. Germany after the war was divided into four areas of responsibility, but has become the most successful united European nation. To divide Syria’s reconstruction into areas of responsibility would limit the costs for each party and would accelerate many funds into the rebuilding.

While US, European, Gulf and Turkish authorities may refuse to invest in Syria – fearing the empowerment of the Assad regime, a division of Syria’s reconstruction in areas of responsibility would enable parties to rebuild Syria with limited political obstructions. Turkey may be able to accelerate EU and Qatari funds into its areas and the US may be able to accelerate Saudi, Emirati and European funds into Syria’s reconstruction.

Trump’s current blockade on investments in Syria may end, but even if not, the next US administration would most likely follow another agenda.

The planned summit in Istanbul between Russia, Turkey, Germany and France will have huge importance in starting to find politically acceptable solutions for the reconstruction of Syria. Besides this summit, bilateral and multilateral meetings are ongoing. Even if international powers have not yet agreed upon a division of areas of responsibility to rebuild Syria, developments on the ground are following this path.

If the de-facto divisions on the ground evolve into an international agreement for reconstruction, all efforts may become more concentrated and effective.

Under today’s circumstances, states have already started to rebuild parts of Syria or at least started to plan it. Iran, Russia, Lebanon and China have started working in reconstructing territories under the control of the Assad regime.

Of these, China may become the most important for the rebuilding of Syria, as neither Russia nor Iran has the financial power to invest to the same degree. China sees Syria as a strategic link on its new Silk Road and has already agreed to fund $2 billion of rebuilding. Additionally, Beijing has announced a further $23 billion in loans and aid for the Arab region, including Syria.

Both nations who supported the regime with military power, and who bear responsibility for the destruction of Syria, lack the resources to reconstruct Syria. Both nations remain under international sanctions.

Interestingly, tiny Lebanon is hoping for huge gains from the reconstruction of Syria. Lebanon expects to become an important actor in the rebuilding as it enjoys a lucrative geographical location between Syria and the Mediterranean Sea. Therefore, Lebanon can expect industrial transit to boom and plans to develop its port capability.

Turkey has already started to rebuild parts of Syria in its zone of influence. Some Turkish firms are present in Al-Bab where an industrial zone is being developed. Turkey has also invested a lot in medical healthcare, education, infrastructure, security and administration. Local councils in northern Aleppo and Afrin are working closely with Turkish authorities to govern their areas, with even ID cards being produced with Turkish support.

The Stabilisation Committee which works in those areas to provide basic needs like food, water and electricity is closely working with Turkey. Turkey has built hospitals, post offices and schools in northern Syria. Turkey alsotrained local police forces to provide security.

According to one report, Turkey spent about $8.1 billion last year on humanitarian aid, and assistance to Syria is an important portion of this. Turkey ranked in second place for the number of contracting companies building the largest volume of projects across the world outside their home countries, according to the latest list of the world’s “top 250 contractors” by the magazine Engineering News Record.

In order to finance the scale of reconstruction Syria needs, Turkey may able to use its friendly relations to help gather funds. Qatar and the EU may be the first points of contact. Qatar pledged $1 million medical aid for Syria, and funnelled more than $4 billion in aid into Syria via the Turkish Red Crescent. Qatar may yet play an important role in funding the Turkish reconstruction efforts as both countries share good relations.

Turkey also managed to make an important refugee deal with the EU to stop the refugee flow towards European nations. As Turkey is also a candidate for joining the EU, Turkey may be able to accelerate EU funds into its construction efforts in Syria.

US zone of responsibility

The US is also playing a role and having its own zone of responsibility is key for Syria’s reconstruction. The US has established several bases around north-eastern Syria and provides important supplies for the YPG-dominated Syrian Democratic Forces – much to Turkey’s chagrin.

The US presence may also help accelerate more EU funds into Syria. France and UK already have their share in the US zone of influence. Gulf countries such as Saudi Arabia and the United Arab Emirates may finance parts of the reconstruction effort due to the US role. Saudi Arabia and the United Arab Emirates have already pledgedmore than $100 million for the reconstruction of Raqqa – which was destroyed by the US air force.

Ömer Özkizilcik is the editor of Suriye Gündemi, a Turkish news site about the Syrian conflict.